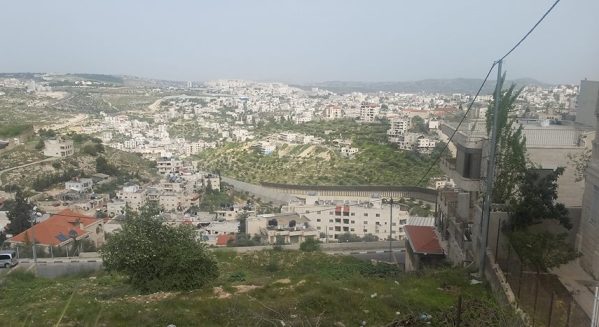 Choose from our Bethlehem Private and Group Tours

The city of Bethlehem in the West Bank is a perfect destination for a short day trip from Jerusalem or Tel Aviv.

Bethlehem's main claim to fame is being the birthplace of Jesus Christ, but the history of the city goes back thousands of years before Jesus was born. The ten kilometer road from Bethlehem to Jerusalem is part of an ancient, well-worn trade route from Egypt in the south to Mesopotamia in the north called the 'Patriach's Way' or 'Ridge Route'.

Bethlehem West Bank
Getting There

Bethlehem isn't in Israel but in the Palestinian Territories, so don't forget to bring your passport. The easy border crossing takes minutes.

How to get there?

You could catch bus 21 from the Damascus Gate bus in Jerusalem and arrive in less than an hour. Driving a private car from Israel isn't possible as there is no insurance coverage.

These days, we think the best way to explore Bethlehem is on a half day or full day Bethlehem tour - on a private excursion or a group tour:

You can choose and book one of our four:

The roots of Bethlehem go back thousands of years. The city name Bethlehem, or 'Beit Lechem' in Hebrew and Arabic has 3 meanings:

In Hebrew, it means house of bread.

In Arabic, it means house of meat.

But it originally referred to the house or temple of the God Lachmu or Lechem - a Canaanite fertility God. Near the city is a large burial ground with more than 100 tombs from the Canaanite period of men, women and children.

It is where the Biblical matriarch Rachel died in childbirth giving birth to Benjamin. She was Jacob's favorite wife and mother of Joseph. The Tomb of Rachel or 'Kever Rachel' is holy to Jews, Christians and Muslims.

You can visit the Tomb of Rachel today, although its not on most standard tours. 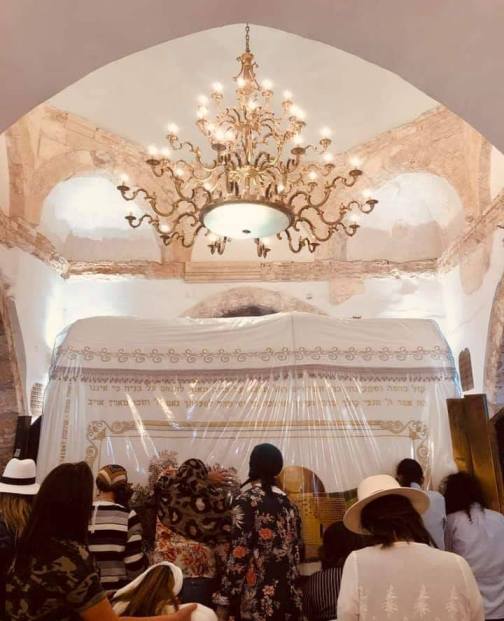 The tomb is covered in a velvet cloth and there is a small room with separate areas for men and women. The place is usually crowded with fervently praying men and weeping women. Religious Jews especially ask 'Mother Rachel' to heal infertility and sickness.

The moving story from the Book of Ruth takes place in Bethlehem.

It tells of of Ruth who decides to forsake her home and her people of Moab and tie her fate to her Jewish mother-in-law Naomi. Together they return penniless to Naomi's home town of Bethlehem. After working in the fields, Ruth meets and marries Boaz, a wealthy landowner and a distant family member of Naomi.

Bethlehem was also the home city of a a young shepherd called David. In fact, David was Ruth's great-grandson and he was ultimately annointed as King of David by the prophet Samuel in Bethlehem Israel.

Most of the pilgrims come to Bethlehem to visit the place where Jesus was born.

The Church of the Nativity located at Manger Square Bethlehem was built above this place. The church has been declared a World Heritage Site by Unesco.

From the outside, the Church looks like a fortress. 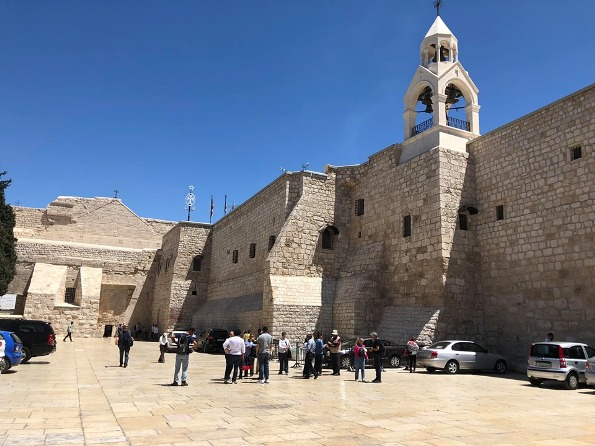 It is one of the most ancient Christian churches, originally built by the Emperor Constantine and his mother Empress Helene in the fourth century.

To enter the church, don't forget to duck your head! The Door of Humility is tiny. 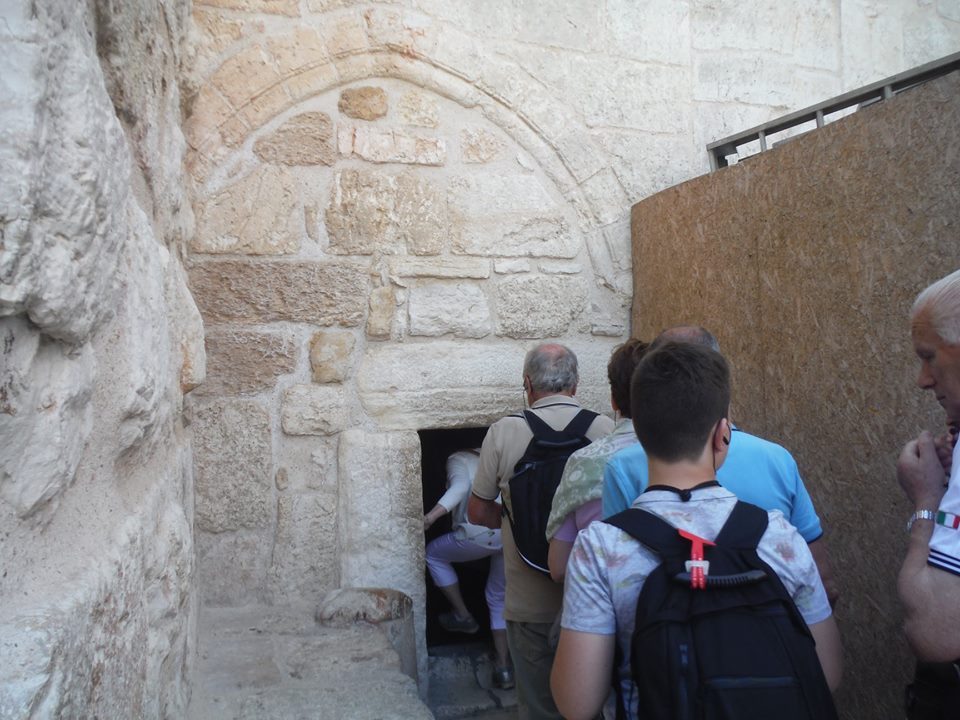 The original entrance was made smaller first by the Crusaders and later by the Muslims, mainly to prevent attackers from riding in on horses. You can still see the arched outlines of the earlier doorways.

To the right of the Door of Humility is a doorway leading to the Armenian Monastery. In fact, every meter of the church is divided between the Catholic, Orthodox and Armenian churches, down to the lanterns!

So what is left from the original 4th century building? 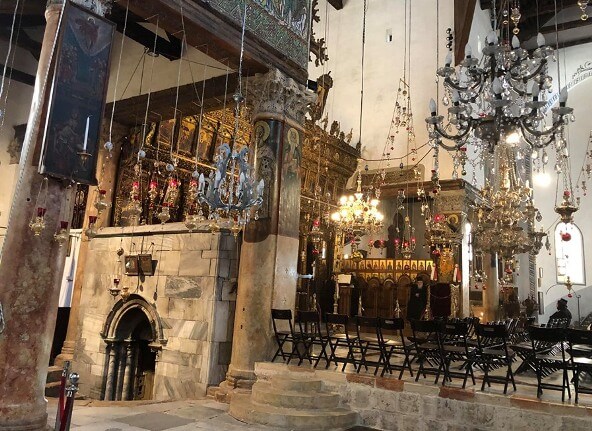 The huge red and white limestone columns near the nave are from the original church, and you can see original mosaics through the wooden doors on the way to the nave.

The original church was destroyed by a Samaritan revolt and rebuilt by Emperor Justinian in the 6th century. Over the centuries, many decorations and painting were added by the Crusaders, wooden ceilings by the English King Edward IV in the 1400's, Russian Tsars who donated silver candelbras, and more...

To the right side of the nave, you will likely see very long and disorderly lines of pilgrims and tourists waiting to descend to the Grotto of the Nativity, the cave where Jesus was born. 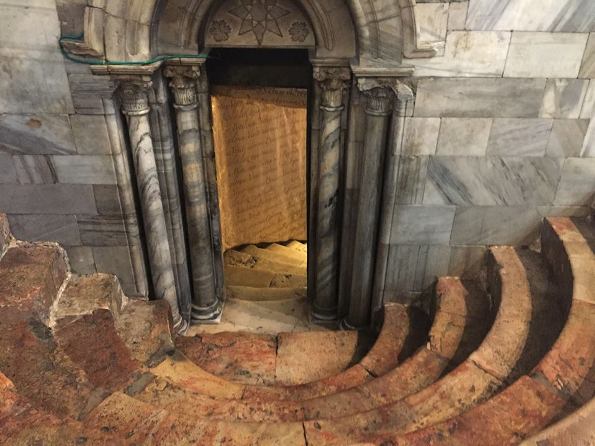 The Grotto of the Nativity is usually packed full of people moving along the line, many praying.

- Another reason we recommend visiting with a tour guide is they help enter the grotto more quickly.

- If you are without a tour guide, try to plan your trip so you descend to the grotto midday, during the week. The lines will be much shorter.

- Christmas in Bethlehem is also an incredible time to visit Bethlehem 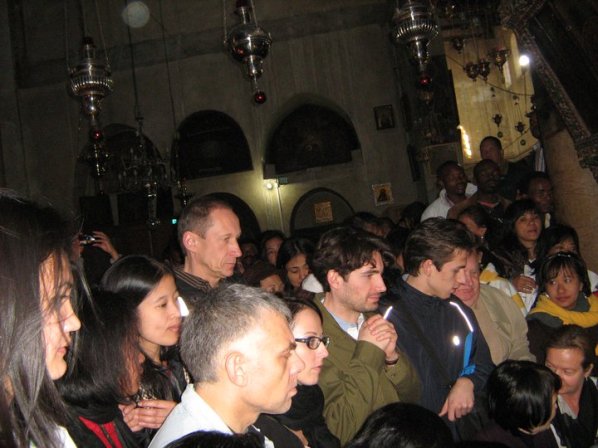 What can be more special than visiting the place where Jesus was born on the date that Jesus was born? Read more about celebrating Christmas in Israel.

Back to the Nativity Grotto, a small alcove contains a fourteen point silver star on the floor that is surrounded by lanterns and frescoes.

The star is said to mark the exact spot where Mary gave birth to Jesus. 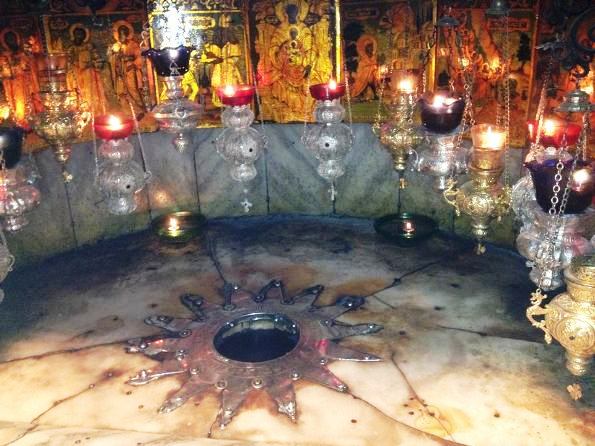 The Star is known as the Star of Bethlehem.

Although all is now peaceful at the Church of the Nativity, a war was fought in Europe over the church and the Star of Bethlehem! For centuries, there was perpetual fighting between the Orthodox clerics represented by the Russians and the Catholic Church represented by Napoleon and the French. Ultimately, the Star was stolen, which led to the Crimean War between Russia and  France and England in the nineteenth century.

Next to the Silver Star Nativity Grotto is the Manger Grotto where Mary is thought to have first breast-fed the baby Jesus.

Like Jerusalem, every Christian denomination is represented in Bethlehem and there are many interesting churches to visit.

In particular, we suggest visiting the Milk Grotto where you descend to three underground caves. This is considered the the place where Mary and Jesus hid from Herod and drops of milk fell from Mary's breast turning the rock white.

Another wonderful site on the city outskirts is Angels Catholic Church at Shepherd's Fields. 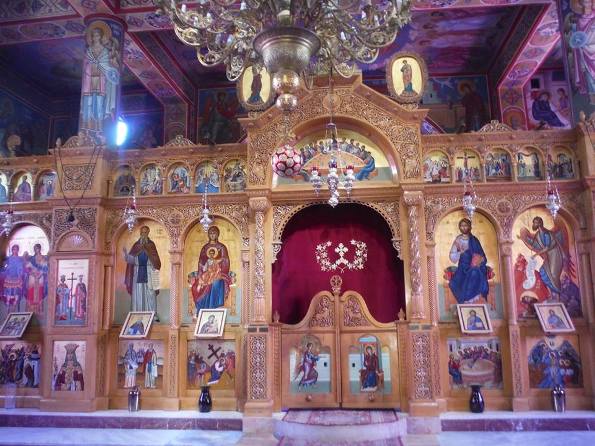 Shepherds Field marks the place where the angels announced the birth of Jesus to the shepherds. The church design suggests a shepherd's tent and there is a grotto just below with a small chapel.

There is also a red-domed Greek Orthodox Church nearby. 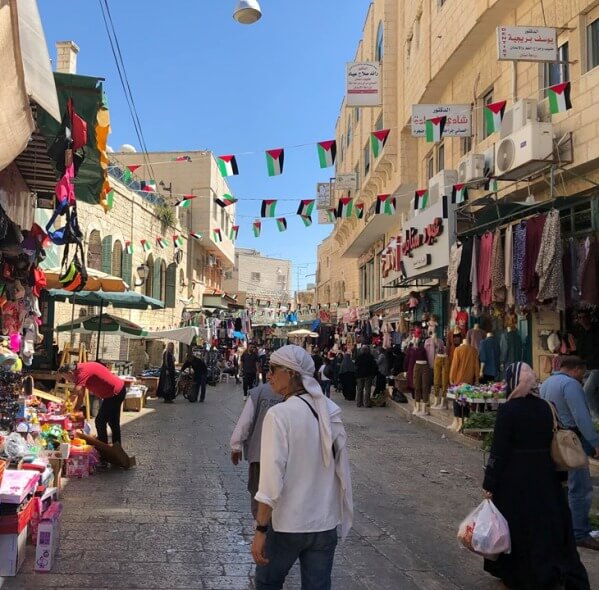 If you have spare time, walk around town and browse around the stalls at the Bethlehem marketplace or 'souk' as it is known locally.

The market was established back in 1929. Its fun to see the spices, fruits and vegetables, clothes and lots of souvenirs. 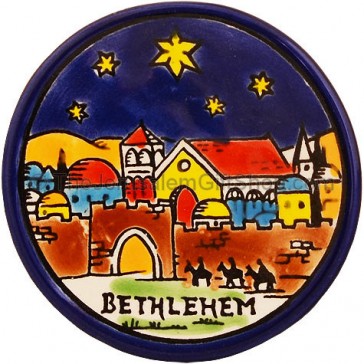 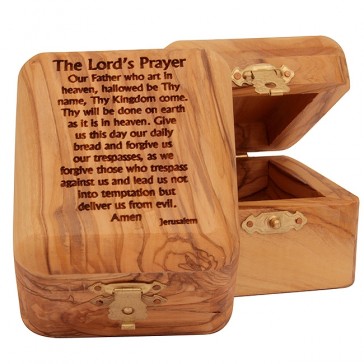 As are the the hand-carved Olivewood Products.

At the Bethlehem marketplace, do stop and have some local food such as the felafel - its delicous!

There are two wonderful monasteries in the Bethlehem area.

The first is the iconic Mar Elias Monastery, halfway on the road from Jerusalem to Bethlehem. 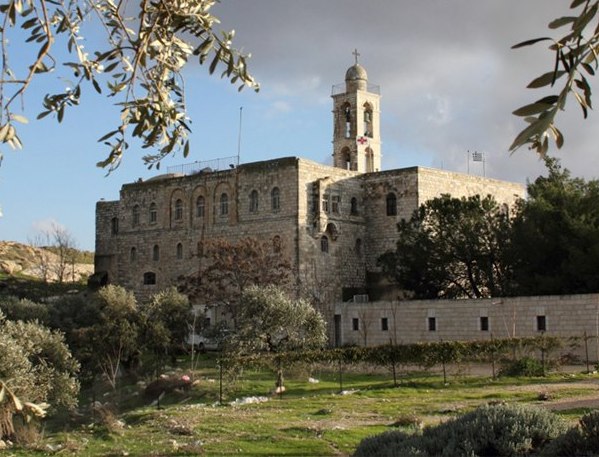 It was originally built by the Byzantines in the 6th century and was rebuilt during the Crusader era after it was destroyed by an earthquake.

The monastery is famous for its colorful paintings of Biblical scenes.

Another impressive monastery east of Bethlehem is the Mar Saba Monastery in the Judean Desert. 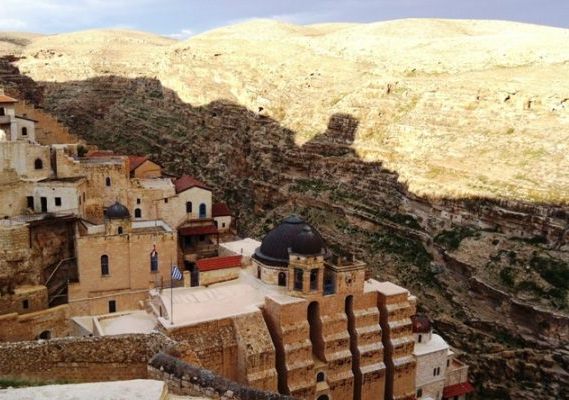 Mar Saba Monastery is a true cliff hanger on the ridges of Kidron Valley, called by Christians the Valley of Resurrection.

Its awe-inspiring and worth a visit. Just note that only men are allowed to visit within the buildings.