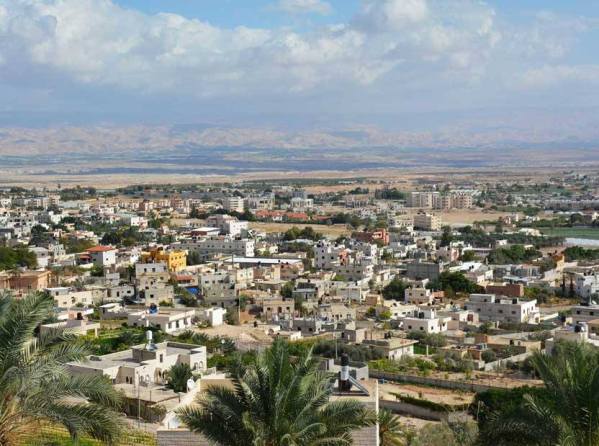 Book our Private Tour of Jericho

If you like history, take a day to travel from ‎Jerusalem to Jericho Palestine.‎

The border crossing is short and easy. You need to take a passport but your passport won't be stamped and chances are it won't be even looked at. You'll get a paper 'visa' by the Palestinian Authority checkpoint that you return on your way back.

The road from Jerusalem to Jericho has been a major highway since Biblical times, and ‎there are great places to visit in the area such as: the Inn of the Good Samaritan, and Qasr el Yahud, a significant site for both Jews and Christians.

So how to get there? It depends on your budget.

You can take a bus (36 or 63) from the Damascus Gate bus station to Bethany, also called Al Ezariya. From there, a shared taxi will to the center of Jericho will ‎cost you less than twenty shekels. You can take shared or private taxis to the ‎different sites you want to visit. Best to negotiate a price with a local tax driver ‎before you start.

Another possibility is renting a car. Israeli owned car rental companies don't allow you  to drive to the West Bank. You could rent a car in East Jerusalem but beware, because the cars are not always in the greatest of shape.

Your best and easiest option for visiting Jericho from Israel is taking a one day tour.

Jericho is the oldest city in the world that has been continuously lived in. In the ‎middle of the desert, the natural fresh water springs drew ‎residents as far back as 10,000 years ago.

Elisha's Spring is the largest natural water source and its name is based on the Biblical tale describing how the Prophet Elisha purified the undrinkable waters of the spring ‎with a jar of salt. 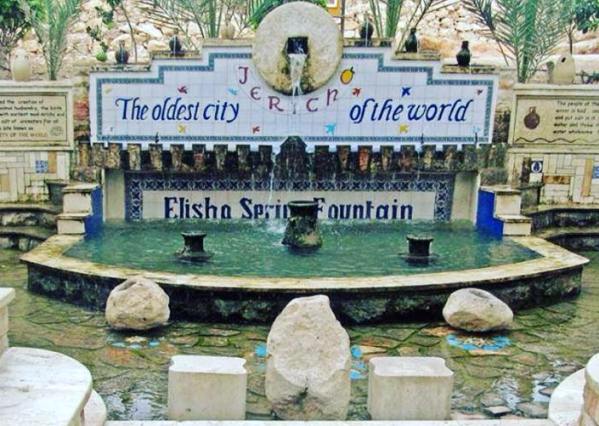 Indeed this ancient spring water is clean and drinkable even today after thousands of years.

Across from Elisha's sprink is the site of ancient Jericho, located in the archaeological mound called Tel es-Sultan - the Sultans's Hill.

It is impossible not feel a sense of history strolling around the ruins. The Tel has 23 historical 'levels'.  This was a time even before pottery, when bands of hunter-gatherers gradually settled down in one place and began cultivating wild wheat and ‎livestock here. Once they settled, these people are called the Natufians. ‎

You can see the remains of their mud-baked, circular homes topped with domed roofs ‎and shrines.

‎In the midst of the settlement is one of the most spectacular historical finds. 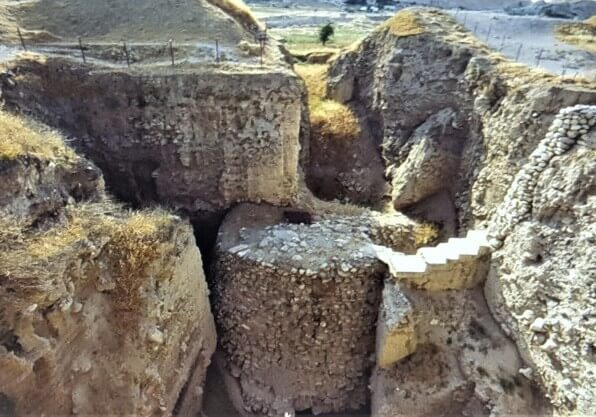 ‎For the first time even in history, the Natufians built a wall around their town and a circular stone tower some nine meters ‎high with  staircase leading to the roof. You can see sections of the city ‎wall, 22 spiral steps and remains of the round tower.

This is the first city wall ever discovered, the oldest staircase discovered and the oldest tower discovered on Earth. Nothing similar of this age has ‎been found elsewhere and it was probably the tallest building then in the world. ‎This was 5,000 years before the much grander Egyptian Pyramids were built. Even now archaeologists debate what was the purpose of the tower.‎

The walls and tower are most likely the earliest version of many more walls that were ‎built by successive people who settled here. ‎

Archaeologists have tried to find evidence of the famous Biblical walls that came tumbling down ‎after being conquered by Joshua and the Israelites 6,000 years later, but not much has been found from this period. ‎Jericho still keeps this secret.‎

A few minutes north of ancient Jericho are two fascinating sites from the Byzantine Period. 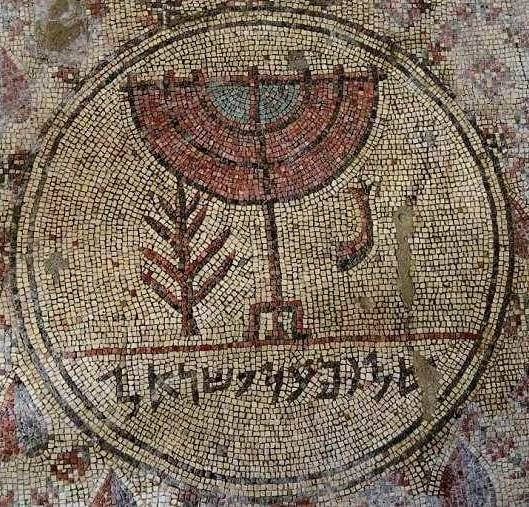 In a basement of a house, you can this ancient synagogue floor mosaic from the 6th century. ‎The original name of the synagogue can be seen on the mosaic, 'Shalom Al Yisrael' or ‎‎'Peace unto Israel'.

Not far away are the remains of Hisham's Palace. 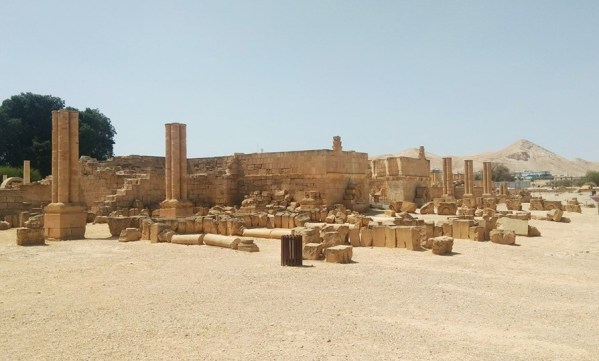 Built in the 8th century as the winter's plaace of Caliph Hisham Ibn ‎Abdul Malek, you can see the remains of the royal buildings with ‎pillars, baths, fountains, a mosque and mosaic floors.‎

Unfortunately, the Palace was destroyed by an earthquake just a few years ‎after it was built.‎

Near the city center of Jericho Palestine is the Russian ‎Museum which explores the history of Russian pilgrims to the Holy Land. It has a collection of coins, mosaics and Russian Orthodox religious artifacts.

The garden has a 2,000 year old sycamore tree which according to tradition is the Tree of Zacchaeus, based on the Gospel story of a corrupt tax collector who climbed the tree to see Jesus in the Jericho crowd.

Monastery of Quarantel on Mount Temptation 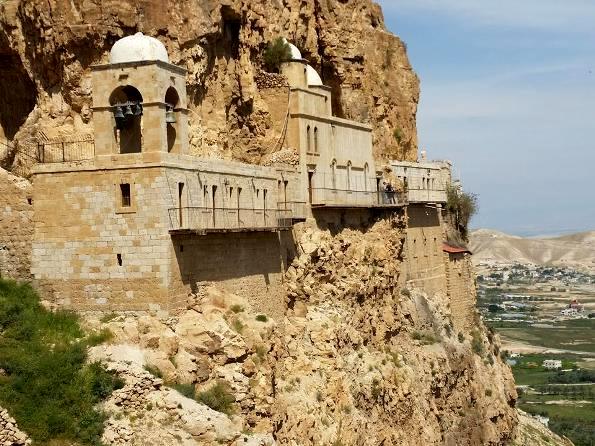 If you are in Jericho Palestine, don't miss visiting the Monastery of Quarantel perched along the cliffs of Mount Temptation. Quarentel means 40 as this is considered the place where Jesus was tempted by the devil during his 40 day fast.

The monastery was initially built during the Byzantine period for the early Christian hermits who lived in the nearby caves. The current Greek Orthodox Monastery was built in the late 1800's.

From the monastery's balcony, you can enjoy breathtaking views of Jericho, the Dead Sea and Jordan. 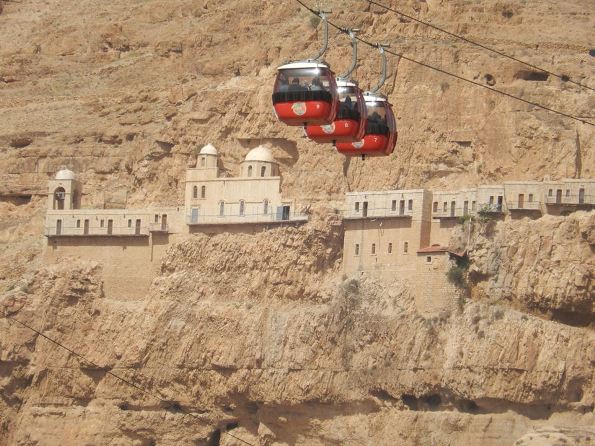 You can take a five minute ride in the state of the art cable cars.

The cable cars leave from Tel es-Sultan, the site of ancient Jericho, and run 1,330 meters - 4300 feet up to Mount Temptation. You can welcome to hike up if you prefer to do so.