Gay Israel and especially the city of Tel Aviv has been voted over and over again as one of the best gay cities around the world. 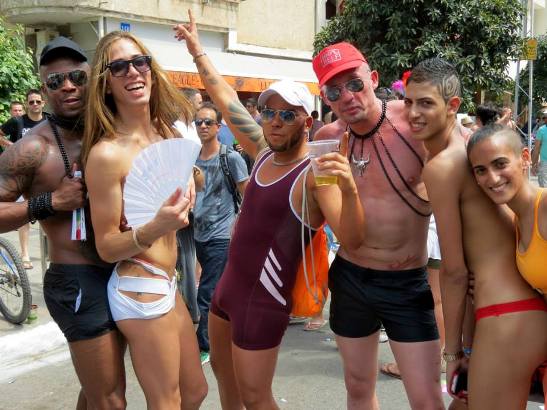 There are some obvious reasons that make Tel Aviv a great city for gays.

But the 'secret sauce'  is the Tel Aviv atmosphere that is especially open and embracing of gays and gay culture. You don't need to hide being gay!

Gay Israel Culture is Out in the Open 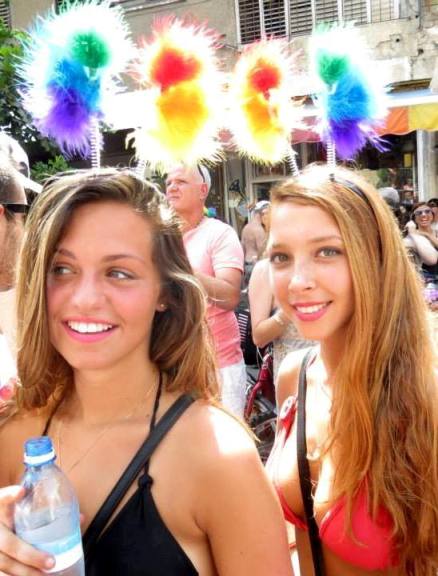 Gal Uchovsky, an Israeli musician and a gay activist explains, “Gay culture in Israel is not ‘underground’ or ‘alternative.’

Most of the best nightclubs and parties are ‘gay-friendly.’ You can see gay men, lesbians and straights truly mix and dance near and with each other. Thats not something you can see often in other parts of the world.

And of course, there are lots of gay lines and parties in Tel Aviv which I’ll share with you further down.

Tel Aviv's Gay Beach - Be Yourself! 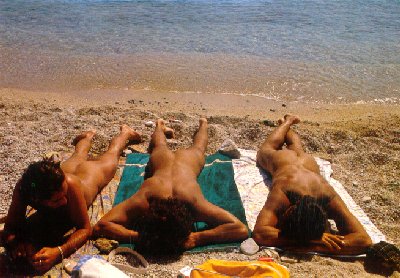 Gays can feel free to be themselves all over Tel Aviv and at any beach, but the best gay beach  is definitely the Hilton Beach.

The atmosphere is great!

Hilton Beach is divided into three with the Gay Beach sandwiched in the middle. Just north is the ‘doggie’ beach where you can visit with man’s best friend, and the surfer’s beach is to the south.

Oddly enough, the Hilton beach is just south of the religious beach which caters to the ‘modest’ public and allows only men and only women on separate days of the week. 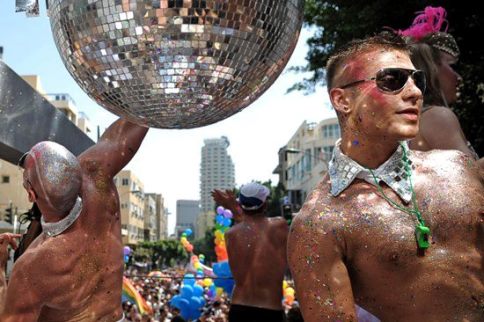 Each year, Tel Aviv hosts an enormous gay pride parade each year with hundreds of thousands of locals and tourists celebrating together.

Here's a short video of the June 2022 Gay Pride Parade:

The highlight is, of course, the Love Parade that will place on Friday June 9th with hundreds of thousands of tourists and locals lining the streets.

The Parade starts on Friday at Gan Meir Park, with booths and great drag performances.

At 1 PM, the parade heads off along Tel Aviv's major streets - Bograshov, Ben-Yehuda, Arlozorov, and culminates at the beach, where the party continues. 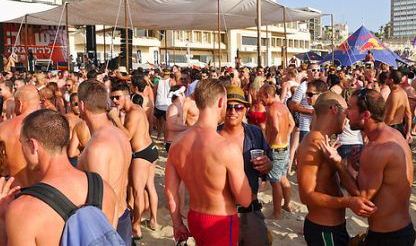 The city celebrates with DJs, music and dance on the beach until senset, and at the cafe's, and parties all day and all night long, throughout the weekend. 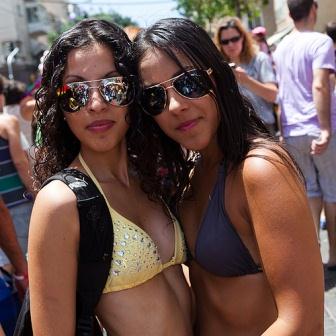 It’s a fun, fantastic experience for gay and straight people of all ages!

So Where to Party in Gay Israel?

As I mentioned, most of Tel Aviv’s parties are gay-friendly and you should feel comfortable partying almost anywhere.Visit our page on Tel Aviv's fantastic nightlife.

There are also clubs, bars and party lines at 'straight' clubs that cater to gay men and lesbians. Check the up to date listing of gay parties further down.

Gay dance clubs start to fill up from 2am onwards.

I have divided the list of gay bars, clubs and lines into 3 categories.  You can choose the link that interests you, or browse down the page.

Bars and Clubs for Gay Men 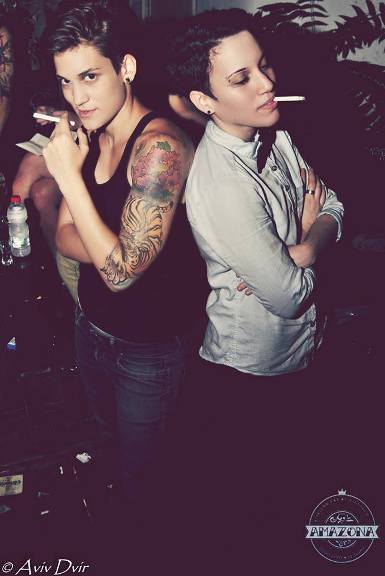 Every Wednesday at Shpagat, a popular gay bar hosts a lesbian line (that is straight-friendly).

Most of the other lesbian lines closed down due to CoVid and haven't yet opened up.

Read more about other bars and clubs around Lilenblum Street in our page on Tel Aviv Streets and Colorful Neighborhoods.

The Sauna Club is known to combine great DJs playing house music, with wet and dry saunas, and lots of private rooms.

Shpagat is a stylish and intimate gay Tel Aviv bar for homosexual men and a straight-friendly crowd.

It’s open all week except Wednesdays when it’s lesbian night.

Lima Lima is a straight club most nights, but runs the Notorious G.A.Y parties on Monday nights only. You can dance the night away to hip-hop and rap music. The Notorious G.A.Y. parties are popular with gays and the ‘straight-friendly’ crowd.

The Forever Line at the HaOman 17 Club, 88 Abarbanel St.

The Forever gay friendly parties (which used to be called FFF Shirazi lines) are one of the longest running and most popular gay Israel lines.


Loads of fun!  FFF parties take place usually run once a month on Thursday or Friday nights and on holidays.  They host the world's best DJs, have outlandish decorations and top-notch drag queen shows around a central theme.

The cover charge usually runs at about 200 Shekel. 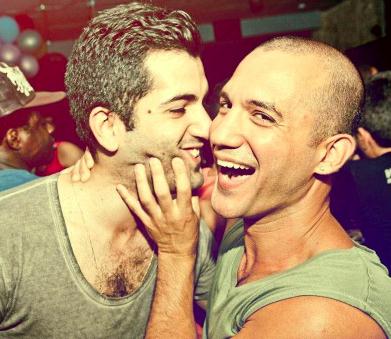 Wednesdays - the Drek Line which currently runs at the Jimmy Who Club Bar at 24 Rothschild Blvd.

Lots of attractive homosexual men and a gay-friendly crowd drink and dance the night away on Wednesday's night.

Anna Loulou is a new, hip bar that is different than the rest.

It’s a place where gay and gay-friendly Arabs and Jews mix freely, listening to the resident DJ and to live gigs playing different styles of Arab music – alternative, pop and folk style.

Thursdays at the Cheesecake Line at the Breakfast Club, 6 Rothschild Blvd

A trendy gay friendly crowd. Expect a cover charge of about 50 Shekel.

Another popular, gay-friendly line that invites international House DJs is the the Block at 157 Salame Street. The Block has probably the highest-quality sound system of all of Tel Aviv's clubs.

Depending on the DJ lineup, expect to pay between 50 to 200 Shekel.

I’ve danced the night away at The Block and had a great time. Just make sure to buy tickets in advance to avoid unpleasant lines and selectors at the entrance.

We hope you enjoy all that Gay Israel has to offer - sandy beaches, the Gay Pride Parade, restaurants and cafes, friendly locals and endless parties. Have a great time!