Tel Arad, Israel
Discover This Ancient City in the Desert

If you enjoy archaeology and history amid desert landscapes, visiting the Tel Arad National Park is a must! 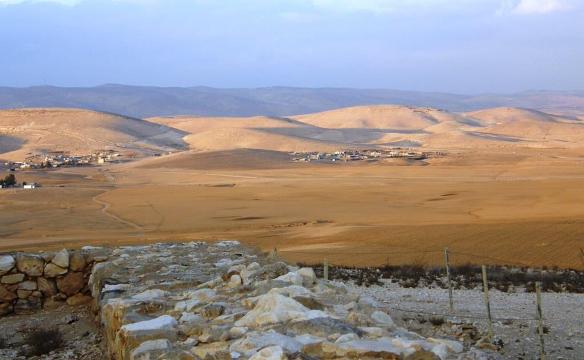 Just 10 miles from the modern city of Arad and west of the Dead Sea, it's one the important archaeological sites of Israel. It's easy to get there by bus or car, or you can take a private tour of ancient sites in the Israel Desert with Levi.

Tel Arad is open year-round, from 8 AM to 5 PM on weekdays and Saturdays, and until 4 PM on Fridays. Earlier on Holiday Eves. There is a camping area where you can sleep overnight in your own tents, in an authentic Canaanite-like building, cabins or in the caravan park.

5,000 years ago, a Canaanite settlement developed in the desert. A few hundred years later, a large city wall was built to protect the city residents.

It was a time when people left their villages to dwell behind city walls all over the Near East. Why, what scared them in the city of Arad? Was it protect themselves from wars with neighboring cities, from the Kingdom of Egypt who they traded with, or from bandits? We do not know.

But whoever the enemies were, their bronze weaponry definitely did not justify building these megalithic constructions. These walls seem to be telling us a secret story like that of the mysterious Biblical tale of the Giants…

The City of Arad in Biblical Times

Arad was the capital of the northern Canaanite Negev Kingdom with about 2,500 inhabitants. 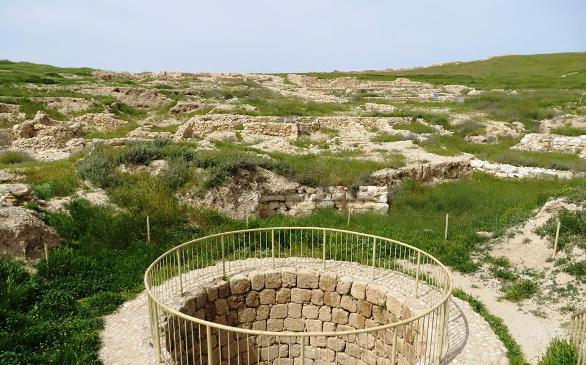 Back then, the climate was milder in the Negev like in this recent picture during the brief 'green' season in March.

You can walk around the remains of the fortress, castle, temples, altars, pottery water cisterns and well-planned streets.

Arad was also the place of the first and unfortunate encounter between the Canaanites and the tribes of Israel led by Moses.  Defeated by the King of Arad, the Israelites were forced to turn back and continue wandering in the desert. Only after the last of those born into slavery in Egypt had died, could Joshua lead the younger generation of freeborn Jews into the Promised Land.

A few hundred years later in the time of the Jewish Kings, Arad became a regional Jewish center.  King Solomon built there a large citadel. 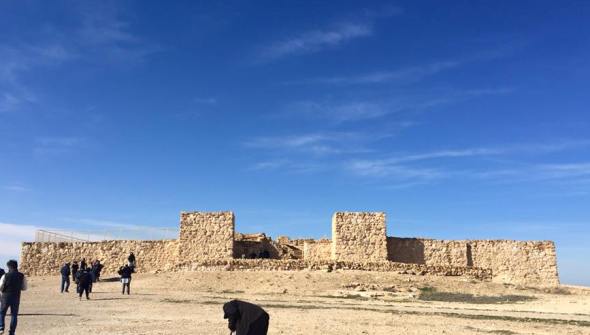 Although the citadel was destroyed and rebuilt several times, it stands proudly today atop the Arad Hill with famous double tower gates.

The Jewish Temple and the Arad 'Ostraca'

Within the citadel, one of the most amazing discoveries unearthed was a Jewish temple.

Its structure coincides with the requirements dictated by the Bible for building the great Temple in Jerusalem. This temple continued to be used until King Josiah banned all places of worship other than the Jerusalem temple.

One of the best finds in Tel Arad are the 'Arad Ostraca', 100 fascinating letters on pottery dating from the Kingdom of Judah.

High-tech analysis of the these letters in 2016 have shown that they were written by multiple writers and help prove that was a very high literacy rate in the Kingdom of Judah at this time, near the end of the first Temple period.

Do you want to discover Tel Arad? You can travel easily in Israel on your own, or discover more of Israel's secrets with your own private guide: